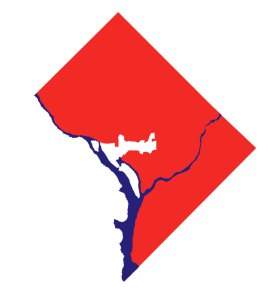 Congress can create the 51st State with a simple majority vote. All of the 37 states since the 13 original colonies have gone through this same process. Once a territory approves a state constitution and demonstrates that it can govern itself (as the District has with local tax money for nearly 50 years), Congress votes to authorize the addition of a new state by passing legislation called an Admission Act. Unlike other territories, of course, the District of Columbia is defined in the Constitution (Article 1, Section 8). But what does that really mean?

The Constitution sets only a maximum size ("not exceeding 10 miles square") for the federal district that is the "Seat of the Government of the United States." Congress has the power to redefine the District of Columbia's borders and reduce its size, as it did in 1846, when the portion south and west of the Potomac River was returned to Virginia after residents of Arlington and Alexandria successfully petitioned Congress, asserting that their territory was unnecessary to the functioning of the federal government.

The District of Columbia will shrink in size, but still include the U.S. Capitol, White House, Supreme Court, National Mall, and most of DC's national monuments. An amendment to repeal the 23rd Amendment would ensure that the revised District of Columbia is henceforth eliminated from Electoral Vote counts.

All of the residential and commercial parts of today's District of Columbia are to be included within the new state, and thereupon admitted to the Union on an equal footing with the other 50 states.

This will give the 712,806 current residents of Washington, D.C. the full rights of citizenship that have been denied them for over two centuries.

Where to Find Us:

To accomodate our customers' busy schedules, we have extended our hours and are now open later.